You might know by now that my family and I are big fans of sleeping masks. By now I have sewn several of these practical pieces, but during the making of this latest piece I had to admit that I still haven’t learned from my mistakes: it has now become a kind of tradition that every time I sew a sleeping mask, I get two outcomes: one I screw up, the second becomes as nice as planned. So the time has come to write down all my experiences for my benefit as much as yours, so before sewing the next one I can get back here and read through, instead of wasting time and material on a failed attempt.

A bit of background info: why?

I sewed this particular piece for myself as I lost the old one in a hostel during my various  wanderings in Britain last autumn. I didn’t need this normally essential accessory during the dark months of winter, but by now summer is searing and I have trouble sleeping after 5 am (no shader or curtain on my attic windows, but all the more sunshine).

As for the design: I connect constellations and galaxies with a summer night so deeply that by July my fingers were itching to create something starry, so there was hardly a question as to how my sleeping mask would look like

Some more background info: how a sleeping mask is made

If you want to sew a sleeping mask, you need two pieces of textile and a rubber band. For the inside material I usually use black velvet, the outside depends on the design. For this piece I upcycled an old T-shirt, so it is dark blue cotton. The workflow goes as follows: 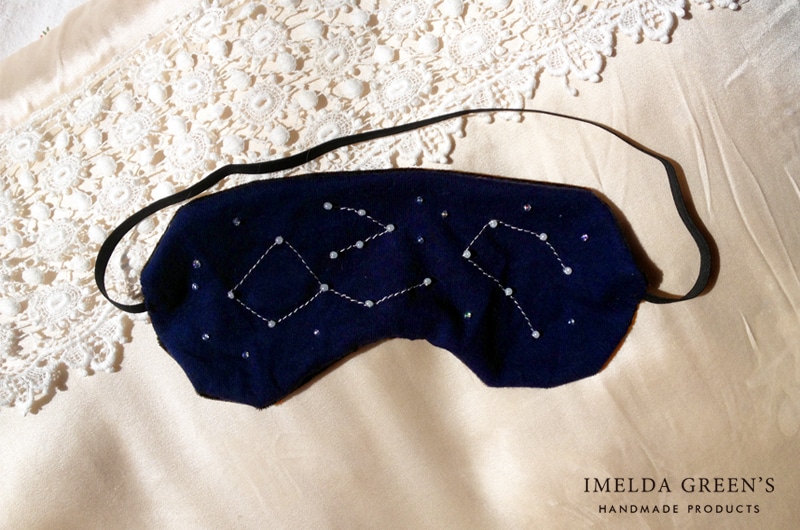 My mistakes and what I learned from them

I hope this bit of info helps you too and you won’t make the same mistakes as I did – and that I myself will not do them again :D Happy creating!